Life as perceived gay as a formerly-perceived heterosexual 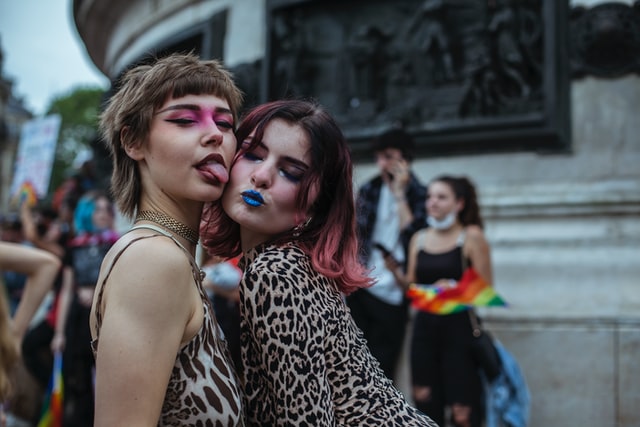 So far in life, I always publicly related to people of another gender. Usually, with persons identifying and looking like men, sometimes with someone queer, but always in a relationship that seemed heterosexual.

Until Lione. Besides identifying as queer, Lione also identifies very much as a woman. Even though I don’t identify as a woman that much, the larger part of the world sees us as a same-sex couple. Gay.

Let me start with a realization that feels important to me:

On a daily basis, I feel grateful for those who stood and still stand, on the barricades for the freedom of minorities. Over the last decades, many have raised their voices for the safety and inclusion of LGTBQ+ folks. Pride dates back to the Stonewall Riots in 1969, in a time where violence against gay men by the police was still normal. Often it was black and trans people, those who suffer other minority setbacks as well, who had the courage to stand up. Ever since ongoing activism supporting the PGTBQ+ community has been happening. But also in my own little world, there have been people paving the way. I come from a small village. In the street where I was born and raised several gay people lived and related. One of my parents’ closest friends is gay. When I was young these people were talked about, but their ways became normal over time. When I told my family I am now in a relationship with a woman, nobody even flinched. One of my closest relatives said: “This actually makes way more sense to me, seeing you with a woman.”

I deeply realize that in other countries people get killed or imprisoned for openly being gay. More than ever I am aware of my privilege to be able to relate with whomever I want and to be open about that. At the same time, the frustration and disbelief have increased of why people feel so threatened by LGTBQ+ folks that violence, even in the name of a religion, is considered righteous, has increased tremendously.

“Did you change your mind?”

A question I have gotten several times over the last months is this one: “Did you change your mind about men and become gay?” Even though I sometimes like to respond in a jokingly way “Yeah. I couldn’t find any Evolved Man so I decided to go for a woman instead”, this is not the case.

I see my sexuality as a dynamic aspect of myself. My preferences for sexual and/or romantic connections may change over time. I may have monogamous bouts in a longer span of non-monogamy. I may feel attracted to a certain type of person at certain times because they provide something I’m looking for, whether that’s safety, adventure, exploring something specific, or something else. But I did not become gay after decades of being straight. I have been considering myself bisexual (attracted to more than one gender) or pansexual (gender not being the defining factor for sexual and/or romantic attraction). I have related to men, women, non-binary folks, singles and couples in the past. Although there definitely has been an overrepresentation of cis men, this is definitely not the only type of human being I can be attracted to.

“Where did your children come from?”

But since I am with Lione the question changed. Now I’m being asked how my children were conceived. I can imagine this is a question that many gay and trans couples will get, just like the question “How do you actually have sex?”

Though talking about sex, I surely learned things in the last months, about which I will write more soon!