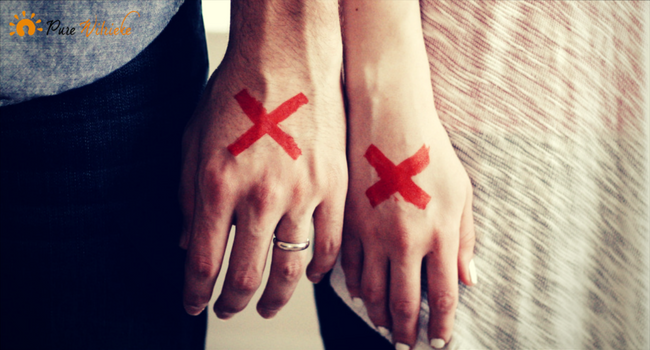 Once we thought we would stay together for life. And in a way, we will, since we have three daughters. But not in a romantic relationship. About twelve months ago we broke up. It felt like facing my deepest fears. It felt like dying. And maybe I did in a way, as the last year transformed me completely.

No more happily ever after

We were so convinced we were going to make it through life together. Even though I got pregnant only months after we met, we hardly had any money, and I didn’t finish studying. I never had a long-term relationship before. I never was pregnant before. It all felt so new. He was my rock to depend on. We found a beautiful balance in which we both could relax and felt happy – a house, a car, several jobs, and two more kids into the relationship we still felt that way. At parties we would always sit next to each other, holding hands with or without company.

Then at some point, I realized we didn’t do that anymore. A while before we had opened up our relationship because there was such abundant love between us, that we felt enough space to share that with others as well. It didn’t ruin the relationship, but it did highlight issues we (or at least I) ignored.

I didn’t need him as my rock anymore – instead, I wanted to explore myself. My sexuality, my power – and so did he, in his way. The balance we had created became unstable. I felt unhappy and caged where I felt free before. And so did he.

For months I didn’t have the courage to end the relationship. It felt like I would face my worst fears of having to let go of my horses, not having any money, no house and failing in general as a human being. Until I realized that I had to step out of this dynamic, no matter the consequences.

I lost my horses.

I had no money for a while.

I still have no idea where I will live in a year.

But I don’t feel like a failed human being.

On the contrary. I have never, ever, felt as strong, confident, empowered and free in my life before. Because I chose for myself. I stepped over my fears to follow my inner calling and love.

And you know what happened after I lost my horses and I nearly had no money (besides crying a lot)? Nothing. The sun still shone. The birds still sang. My friends still loved me and showed their support and love even more – mirroring and honoring my courage. The fear melted away and in its place came a deeper sense of happiness and being at peace with life than ever before.

At the same time, there was no time to hide behind excuses to not give my gifts to the world anymore. For years I had refused to give individual sessions to people because I felt too insecure. I held back from giving deeper and more frequent workshops because of the fear of not being able to fill them.

Now it was either ‘getting a real job’, or giving what feels like my life’s purpose my all. I chose the latter, even though it freaked me out – because the first option freaked me out more.

I created an online course in just a few weeks, multiplied the amount of workshops I facilitated, multiplied the amount of retreats, filling them completely nearly always. On the way I got into touch with truly amazing and inspiring teachers that wanted to co-create, I received invitations to facilitate workshops at festivals throughout Europe, and my individual sessions filled up effortlessly.

In just a few months I went from having nearly no money to a business that supports me and my daughters, just because I stopped hiding behind insecurity and allowed myself to create everything that felt necessary. That I felt excited about. That felt wrong not to put out there.

Breaking up doesn’t end the challenges

I thought that breaking up would end the challenges between my ex-partner and myself. That the dynamics that didn’t serve us anymore would evaporate when we would see each other barely.

Well, they didn’t. Maybe they even got worse, now there was nothing to save any longer. Although we decided not to argue in front of the kids, or talk bad about each other, we got pretty well skilled in fierce WhatsApp discussions. But it feels good, not to hold back at standing up for my desires any longer. And yes, maybe it feels less spiritual to actually get angry – but this is a skill I want to master too. And f*ck spirituality when it means pretending to feel high and enlightened all the times.

Emotional growth is messy. Break ups, even smooth ones (which I consider ours to be), are messy.

We just need to learn to deal with the mess. Move through it gracefully. Just like a mother, receiving her mud-covered kid who enjoyed jumping in puddles. Taking a breath and taking a shower, letting all the dirt wash away. And when that doesn’t suffice, there’s always Rage Against The Machine and a bunch of pillows to get off on. Friends that can receive my uncensored complaints without wanting to solve anything, judge anything or soothe me.

Let’s break up and have a house together

My ex and I still share our house and a trailer in the forest. The kids live in one place, and we swap every other week. Birdnesting, the Americans call it. I like it. For now.

Often, when people split up, it’s so rigorous and abruptly. After many years of building something up, the end has to be as fast as possible. We are a year in the process and still far from done. I like the slow untangling, especially for the kids. They slowly get used to mum and dad not being together, without also losing their safe bed, school, and friends. We both want to move to another place soon (luckily we want to move to the same place), and then have our own separate places. But until that, we do this bird nesting thing.

One week I’m the mum that is there every afternoon at the schoolyard and is there day and night for her kids. The other week I’m the adventurous kinky tantra-teacher traveling throughout Europe.

Most important tools and resources

There is a bunch of things that I find unmissable in my life right now. In no particular order these are:

For the last twelve months, I have felt pretty introvert. My primary focus was, and still is for the larger part, with building a new safe next for me and my (inner and outer) children. Except for some careful explorations with a beautiful man some months ago that taught me so much about what I want and don’t, there hasn’t been much wild and sexy adventure in my life. But my heart is opening up for new steps. Tabula rasa. New beginnings and a blank sheet.

But moving into a relationship will be different this time. Starting something new by putting everything on the table. I want to carefully and thoroughly consider what it is that we want to explore, what we have to give, what we want to receive, what we fear and desire.

Will it be another open relationship? Monogamy? Something else?

Do you want to dive deep into your personal process of creativity, intimacy, love, and relationships? Book an (online or offline) individual session with me – also for business inspiration and finding where you feel stuck, and how to move beyond that.

Sign up for my newsletter to be the first to know about new projects and read unpublished material, and check my calendar for upcoming events in Europe!