How to deal with other people’s emotions 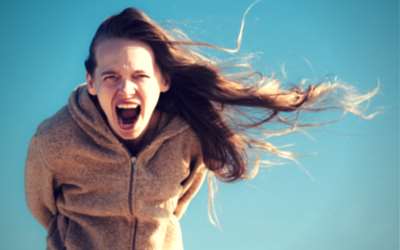 Do you recognize this? You are somewhere where people aren’t feeling very happy. Maybe you’re waiting in a queue for the cash register to pay your groceries. People around you seem to be hurried. They are grumpy, annoyed when someone uses more time than strictly necessary to pay. Or you’re sitting on a train and someone is having an argument over the phone. You feel all your happy feelings leave your body. The muscles in your neck tighten. You clench your jaws. Why are these people doing this to you? Can’t they go somewhere else to express their impatience or anger?

During a day there are many moments where you are exposed to the feelings, emotions and behavior of other people.  When you know you are sensitive to this, there are three things you can do:

For the first option you basically have to move to the end of the world or beyond. In this society, each day you will encounter people and be forced to contact them in some way. There’s always the cashier, your lover, your kids, the call center girl who phones unannounced. And what about internet? All the emails and Facebook posts you just have to check… there is human interaction constantly. Avoiding it all is quite impossible. Even the man on the moon has to contact Houston.

It seems that the choice between the second and the third option is not a choice, but something that just happens. “I can’t help it that I feel drained when my neighbor is complaining again about the cats of the other neighbor using his garden as a kitty-bathroom.”

The assumption that you have no choice if you let yourself be influenced by others emotions is nothing but an assumption. Whether you are or aren’t influenced is something you’ve taught yourself. You’ve created a pathway in your brain that is followed. Input -> Output. It’s like going from A to B. There are probably several routes you can take to the shop where you buy your groceries. But, without thinking, you always take the same way. Does this mean there is no other way? No. It only means you aren’t consciously aware that you can choose each time.

The path to not being influenced by other people’s emotions is knowing you have the choice not to be influenced by their emotions.

One of the ways in which I help people and horses is working one on one with them, using different techniques like healing, reading, Quantum Touch, Byron Katie’s Work and just talking. This morning I was working on a white mare. Each time I touched her she became very upset. She would shake her head and threaten to bite me. She clearly believed she had to protect herself from something that frightened her. Since I was the one putting a hand on her body, it was easy for her to show her fear for something that might happen as anger, and direct it towards me.

It would be very easy to feel threatened by this horse and feel personally attacked. I saw an angry horse showing her teeth, moving her mouth in the direction of my hand. But I felt this wasn’t an angry horse. This was a frightened horse who taught herself she needed to use extreme emotions to make people aware of her feelings. This wasn’t anger directed to me. She didn’t hate me. She was afraid I might cross her borders and hurt her. She projected an expectation onto me. I clearly realized her emotions had nothing to do with me. There was no reason at all to take her reactions personally.

I decided to just let my hand rest where it was, and stay very calm and grounded while she was expressing herself fiercely. Within a minute her behavior changed. She realized her behavior didn’t move me at all. She expected the worst, but my hand didn’t hurt her. The muscles in her face softened, she relaxed, and with a large sigh she let her head hang low, closed her eyes and licked her lips. All these are signs of a relaxed horse who is processing what just happened. When I slightly moved my hand she would react angrily again, but each time she relaxed within seconds. I touched her whole body, and she relaxed more quickly and more intense each time. At the end of the session I put my hand on her chest again, on the spot where she reacted in the most intense way. For a second her head went up and a flash of angriness was in her eyes. Where she instinctively reacted very emotionally, she now had a conscious moment of choice. There was one second of anger, but then she chose to relax. To stay soft, warm and open. She closed her eyes and deeply enjoyed my touch. I could touch her everywhere without her feeling triggered to become emotional again.

Within one hour this horse learnt that instead of automatically react in a very emotional way, she had a choice. She also taught me I had a choice. By not taking her emotions personally and not judge her for having these emotions, I could choose not to be influenced by her emotions and stay as calm, open and centered as I was before.

One of my three daughters is very sensitive. Sometimes she reacts very emotionally to something I say. She feels out of reach, like she’s in her own world. She doesn’t want to be cuddled, but feels rejected when I leave her alone. In the past I always tried to comfort her and tell her there is no need to feel sad or angry. But I realized that by telling her she doesn’t have to feel the emotions she feels, I teach her to ignore or reject a part of herself. But her emotions are a part of her. Not just the positive emotions; also her (in my perception) negative emotions are part of her.

On a particular moment I sat on her bed while she was angry, sitting with her back towards me, arms crossed and shouting ‘NO!’ to everything I said. I tried to calm her with no result. Suddenly I realized I rejected her emotions, and therewith I rejected her. I changed my behavior and started to tell her it was okay to express her emotions in any way she wanted, so screaming was perfect. She looked at me very surprised and shouted even louder. I just sat there. I didn’t look at her because every sign in her direction made her angry. For a while she kept staying in that emotional state. But then she seemed to realize that when there was no resistance to her emotions, she could let them go. Suddenly she came towards me and cuddled up on my lap, putting her arms around me and asking to be held tight. We sat there for a while. She relaxed and I could feel her heavy emotions flowing away. When she looked up at me after a while, she smiled and was again the cheerful little girl she also is.

Lessons of the upset child: heavy emotions thrive by resistance. When there is no resistance, there is no reason to stay stuck with these emotions. All emotions have a right for existence. Anger, frustration, sadness… they all have a message and may be there.

When you feel your state of mind being confronted with the emotions of people around you, be aware that you always have a choice to not be influenced by these emotions. Remember these things:

What to do when you do get emotional?

What to do when you unexpectedly do get emotional because of other people’s emotions? Try to realize that this is what is happening. Try to be aware what part of you is triggered by the emotions. Impatient people might remind you of a teacher who was always hurrying you when you were small and needed more time. Fighting people might remind you of your parents fighting. What part of you is being triggered? This part is asking for some attention. Often just being aware of the process is enough to be able to let go of the emotions you are feeling.

Another method is realizing clearly how you feel having this emotion, and how you would feel if you just let go of the emotions. The vast part of the emotions may disappear by just honestly expressing them to yourself.

Keep breathing. Feel your feet touching the ground. I often use a visualization in which with each exhale I let go tension I feel in my body and let it flow to the earth below my feet. With each inhale I fill my body up with positive, relaxing energy.  You can try this or find out what works for you.

Sometimes I need some time on my own to deal with intense emotions or a massive situation. Going for a walk, meditating, sleeping, singing or writing down my emotions are methods that work for me to let go of the emotions I took over from others.

There is no fixed method for releasing emotions. You can try several ways and find out what works best for you. Keep this favorite tool nearby for each moment of the day where you feel yourself being influenced by the emotions of others.